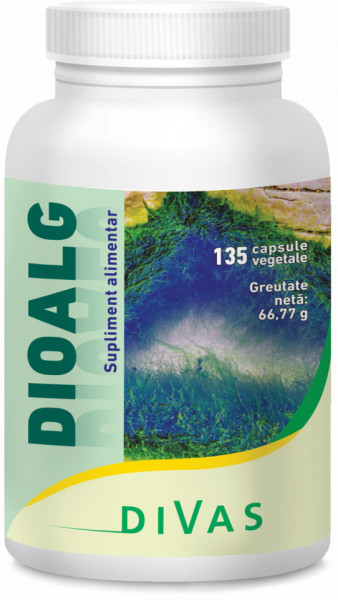 Alternative supplement with ASTAXANTIN against cancer, serious illness and restoration of cellular functions.

DIOALG is a natural, algae supplement that has many health benefits.

It contains Astaxanthin, the most powerful antioxidant in the world.

Helps to improve the whole body through 3 phases:

The Chorela Alga, a small algae that has been known since ancient times for its benefits to the body, has the ability to enhance the elimination of toxic substances in the body, as well as heavy metals, as it has a high content of sporopolylene, which acts like an extraordinary magnet against toxins.

Spirulina and Lithothamnium have the role of transferring to the body cells a lot of vital elements, namely 4,000 in number, among which vitamins, fatty acids, amino acids, antioxidants and other microelements that are essential for the functioning of the body, especially since this supplement food has extremely rich content:

All vitamins (A, B, D, E and K)
Saturated and unsaturated fatty acids such as, for example, Omega 3 fatty acid
Rare microelements such as iodine, selenium, zinc, cabalt, iron and chromium
The eight essential amino acids
Antioxidants especially from the carotenoid and beta-carodite group

The natural Astaxanthin, known as the most powerful antioxidant on earth, provides high class cell protection.

With a rich content of natural astaxanthin, found in the DIOALG Supplement, whose antioxidant properties have been known since ancient times, the human body will have the necessary amount to fight cancer and other serious illnesses.

So this natural remedy has the role of eliminating the free radicals in the body, which are particularly toxic to the body, as they attack the sensitive wall of the cells, leading in time to serious diseases such as cancer, rheumatism, Alzheimer's, arthritis , osteoarthritis or cataract.

According to specialized studies conducted over time, astaxanthin not only protects cells against free radicals, but also has antioxidant and anti-inflammatory properties. Also, research suggests that asthaxanthin reduces triglyceride levels in the blood and increases cholesterol with high density lipoproteins in people who have high cholesterol.

It also seems to reduce the pains caused by rheumatoid arthritis and tumor inflammation and improves the mood of people suffering from this disease and may even prevent the adverse effects from a vascular accident.

The natural Astaxanthin is:

- protects very effectively against free radicals;
- is not "pro-oxidant" and thus has no side effects;
- provides antioxidant and anti-inflammatory protection to the brain and eyes.

DIOALG is also a good cure for comforting sleep and helps to keep blood circulation well.